Appearances can be deceiving.  When I visited Lumberton in February, the town and surrounding area looked as if it had recovered well from the horrific flooding associated with Hurricane Matthew.  Animal carcasses in advanced stages of decomposition strewn along the shoulders of roads and death’s fetid stench emanating from creeks and rivers seemed the only reminders of a natural disaster.

Talking to Lumberton residents prior to the start of the 2017 Rumba on the Lumber Festival’s cycling events disabused me of this notion.  The volunteer working the registration table said flood waters destroyed or made many homes uninhabitable, putting a severe strain on temporary housing and other resources.

Jef Lambdin, one of the organizers of this year’s Rumba on the Lumber weekend, added

“All the houses that were damaged now have to be rehabilitated, rebuilt or bulldozed.  Many of the grants available will pay for a home to be bulldozed and/or built up with a higher foundation.  None of the funds available from state or federal agencies will pay for the appliances and fixtures necessary for living in a home after it has been rebuilt – stoves, refrigerators, etc.  So funds the Road Runners will be donating to the Robeson County Hurricane Matthew Recovery Committee and the Lumberton Hurricane Matthew Disaster Relief Committee will go to families to purchase said items as well as purchasing building materials for families that choose to rebuild themselves.  There are still around 80 families in hotels.  Estimates vary between 150 and 200 homes still being repaired/rehabilitated/rebuilt.”

2017 Rumba on the Lumber Festival:

After talking with Lambdin and completing a simple onsite registration process, I began prepping my bike for the 12 noon start of the 100K Metric Century ride.   Part of this preparation included raising the seat post by about 1/3’ after experiencing leg cramps the previous day that may have been caused by excessive lowering of the post.

I located a group of cyclists from the coast with whom to ride after ascertaining that they planned to maintain an average speed of 13 – 15mph, a good pace for me after yesterday’s hilly ascent up Caraway Mountain, shortly before Owen Thomas, President of the Robeson Road Runners, welcomed everyone and gave the opening instructions.

Thomas indicated the route was essentially the same as last year except for the River and Burney Road loop being reversed for safety reasons and pointed out the official SAG vehicle and ambulance that would be patrolling the course.  One alert cyclist observed that the SAG support number had been omitted from the cue sheets, prompting Thomas to call out the number and encouraging everyone to write it down.

As the ride began from Northeast Park in Lumberton, I pedaled hard to keep up with the group from the coast whose average speed fluctuated between 14 – 16+ mph.  I feigned a problem with my Garmin near the 5 mile mark and let them slip away around the next curve as I planned to ride the entire route without stopping and found the added pressure to keep up undesirable.

Cyclists listening to the opening instructions and getting ready to start: 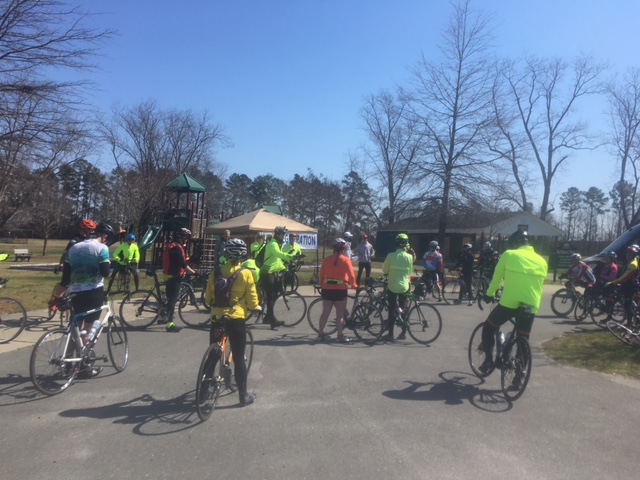 Being last on these smaller rides is not uncommon for me, and I settled into this comfortable routine by waving the ambulance on past.   I passed the single overlapping rest stop at Tar Heel, NC about 20 miles into the course as my erstwhile companions restocked their provisions.  They would pull ahead again as we prepared to turn left onto Burney Road, and we would trade the lead one final time as I moved ahead after they paused a second time at the rest stop only to fall behind for good as we neared the Smith Mill Road turn from Tar Heel Ferry Road.

Biggest challenges of the ride?  Battling an annoying headwind for the first 35 miles and the mind numbing lassitude you sometimes encounter riding solo on a mostly flat course.  Singletary Church Road was a perfect example with its nearly 8 miles of long, straight stretches broken up only by the occasional curve, church, or in home hair salon.  Finishing this monotonous grind provided an emotional lift and awareness that I would soon be back at Northeast Park.

Entrance to Northeast Park in Lumberton:

I completed the 100K route in less than 4.5 hours with no stops achieving my goal.  I posted a 14 mph average speed with an average cadence of 80 rpms.  I discovered I was not the last person back as 3 other cyclists remained on the course, including a husband and wife from Canada (Quebec City), who had gotten lost during the ride.

Happy to be back after riding over 62 miles in Robeson and Bladen Counties: 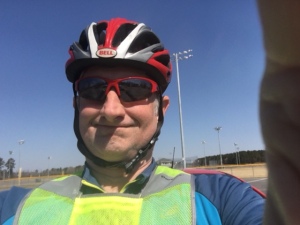 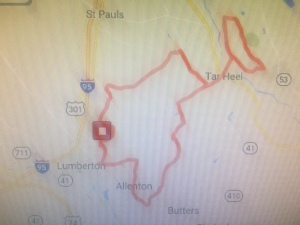 Lunch awaited us upon our return with the famous Butt Sliders from Candy Sue’s, a local restaurant, proving a popular item.  Spinach dip with pita chips, fresh fruit, soft drinks, and water comprised the other nutrition and refreshment options.

I congratulated Lambdin and Thomas on a solid effort and was pleased to hear Thomas contemplating how next year’s Rumba on the Lumber committee might grow the Sunday cycling events to generate turnout more equivalent to the Saturday portion of the weekend when the running and walking events take place.  By then I hope Lumberton, Robeson County, and surrounding areas will have fully recovered from the devastating flooding unleashed by Hurricane Matthew.

Interested in attending the 2018 Rumba on the Lumber?  Tentative dates are March 3rd and 4th.  Keep up with all the announcements and details at http://www.robesonroadrunners.com.

This is a text widget, which allows you to add text or HTML to your sidebar. You can use them to display text, links, images, HTML, or a combination of these. Edit them in the Widget section of the Customizer.

This is a text widget, which allows you to add text or HTML to your sidebar. You can use them to display text, links, images, HTML, or a combination of these. Edit them in the Widget section of the Customizer.
%d bloggers like this: